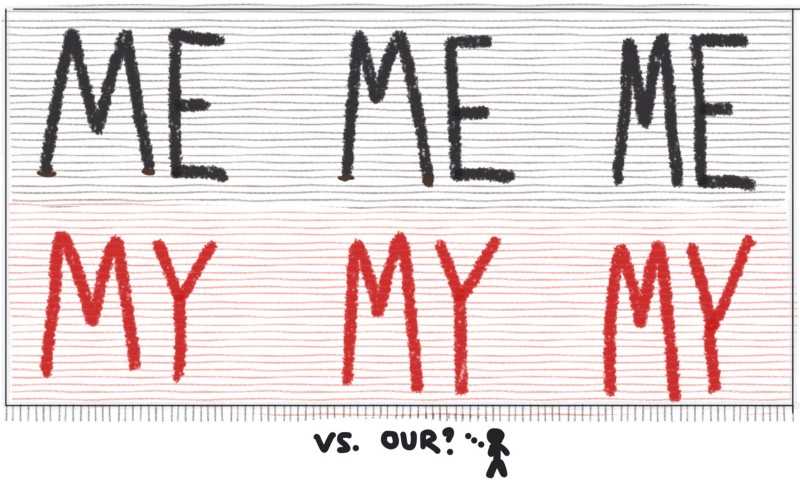 I’ve been thinking lately about the cult of My-idea-ism.

My-idea-ism is the need for your idea to “win”. It is the antithesis of Our-idea-ism, or perhaps more importantly Right-idea-ism…where a team progressively explores options to solve a compelling (and valuable) problem, and settles on the best path forward based on evidence.

My-idea-ism permeates modern organizations, especially here in the United States, where we are highly individualistic, assertive, and competitive, and have lower long-term orientation (source). Reflect on how promotions often hinge on “pushing your idea through to completion” vs. whether it was necessarily the right idea, or whether you empowered others to dream up even better ideas. We value decisiveness, “vision”, having the answers, and filling the backlog, and devalue ambiguity, and risking “analysis paralysis”.

We have a board meeting coming up, and it is super important that we bring up some of the cool stuff we have planned! What do we have planned? What will pique their interest? If it gets green lighted … you’ll get to own it! Update the deck, OK?You’re rewarded for the rapid reply (the My-idea-ism) in this case. You dream up a persuasive story, something that “pops” and seems coherent, and you reply…even if you have reservations. My-idea-ism funds your team. My-idea-ism gets you headcount. My-idea-ism gives a great fodder for your resume. It’s compelling. Nothing is more comforting than a neat and tidy feature-laden roadmap :)

The battle of (and for) ideas can be fierce. Some organizations openly pit PMs against each other to get their “project” or “product” (note, their ideas, or at least unique views of the problem) “green-lighted”. Sure … in an ideal world they would pitch the value of solving a particular problem, but it tends to not stop there. Drop some shiny objects — some machine learning, perhaps — and you’re good to go. This could explain why MBAs with consulting experience (with all that experience making “recommendations” and pitching) tend to advance in certain environments.

So is My-idea-ism just a part of how companies work? For the many brilliant people I know who aren’t natural “pitchers” and presenters, and who choose to step back and ponder the actual problem, I sure hope not. Same goes for improving the quality of our decisions, quality of our products, and well-being of our teams.

I remember talking to a newly hired, and highly skilled software architect from Europe (from a more “collective” work culture). They were blown away by the competition for tech stack choices, and the “right to own” the project…vs accepting that no solution would be perfect, and to start collaboratively validating key assumptions. It was a major shift, and not a path he was willing to take.

On a similar note, I’ll never forget a software developer tentatively dropping an amazing idea on the team…weeks after the more vocal team members had converged. After some private conversations, I learned that they simply couldn’t get a word in edge-wise. The problem had persisted for years.

My biased opinion is that My-idea-ism eventually bites you. At least based on what I’ve seen. It can help your career, depending on where you work. But in the long run (and yes, we’re not as long-term oriented here in the States), becoming awesome at bringing context, and data to teams, and inspiring the best collective solutions will win the day. You’ll become a force-multiplier.

As a next step: When presenting, imagine that you’re framing the problem so that it is completely solution agnostic. What data/context could you give the whole team, such that anyone could pitch their idea. Focus on that context. Focus on valuable problems to solve. Focus on a framework for decision making. You might have a “great idea”, but offer it as one option, and make sure it fits your framework.

Make the move to Right-idea-ism.